Sausages and elections go hand in hand in Australia.  The schools and community centres which are used throughout the country as polling booths take advantage of elections to do some much-needed fundraising.  The most popular fundraising event is the sausage sizzle.

All that is needed is a barbeque, sliced white bread and tomato sauce to make a sausage sandwich.  Often fried onions are included.  I have no idea why manning the barbeque is traditionally a male thing.  In my family it isn’t.

It came to me when I saw that “#sausage” was trending world-wide today on Twitter:

As Australian's head 2 the polls together we have hit a worldwide peak 4 the use of the word #sausage on Twitter in 2013! #AusVotes

How long have sausages been associated with Australian elections I wondered?  So I did a simple search in our wonderful Trove digitised newspapers site for the words “sausage” and “election. Early results were about sausage wrappers. For example this article published in Broken Hill:

So for all researchers out there, maybe this is why you are having trouble finding material about the 1891 election in New South Wales.

We speed through to 1917 for the next interesting comment about sausages and elections.  Calling a newspaper a ‘sausage wrapper’ was a serious insult worthy of damages:

I saw other references to newspapers being sausage wrappers.  Calling a newspaper a sausage wrapper was clearly a well-used insult for the journalism in some of the papers of the time.

But I didn’t find anything about cooking sausages for fundraising at polling booths.  Most of the newspapers that have been digitised date prior to 1954 so I guess that this form of fundraising is a relatively recent innovation.  However, I did find this rather intriguing item about a ‘sausage bribe’ from The Canberra Times in 1989:

I love the accusation thrown at the West Australian Liberal Party leader, Barry MacKinnon, that he had been caught in the dastardly deed of “being involved in the dissemination of sausages”. Of all the terrible things politicians stoop to!

I don’t remember anything about this. I can’t find any further articles about this evidence of election silliness. Perhaps you can find some more? (A search for ‘sausage’ and ‘bribe’ did reveal an article about a fundraising car rally in 1990 “where bribes are encouraged and where people are fined for taking things too seriously”.)

If you want to get a feeling for how important sausages now are at Australian elections, check out these popular websites:

And here’s a last look at some of those humble sausages that helped to put some extra funds into our schools today: 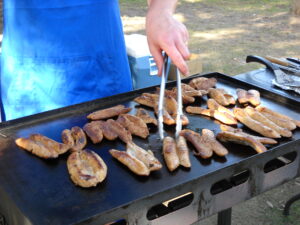