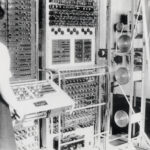 The first published computer program was written by a woman. The programmers of the world’s earliest digital computers were women. The inventor of the significant technology behind the most widely used programming language in the twentieth century was a woman. The software which was responsible for the first landing of men on the moon was written by a programming team led by a … END_OF_DOCUMENT_TOKEN_TO_BE_REPLACED