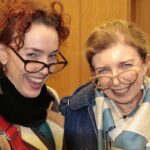 I have reported a number of keynote presentations from the annual conference of the Australian Historical Association this week, but my representation of the conference would be lacking if I did not report the humour that popped up throughout the five days in Canberra. The conference theme, ‘The Scales of HIstory’, lent itself to some light-hearted quips. Of course there were … END_OF_DOCUMENT_TOKEN_TO_BE_REPLACED

This week I have given you some snippets from the fabulous program at this year’s Australian Historical Association conference, known on Twitter as #OzHA2018. But while it is important, it is not just the program that makes a conference enjoyable. There are two other factors in a successful conference – the manner in which it is organised and administered, and the attitude and … END_OF_DOCUMENT_TOKEN_TO_BE_REPLACED

At the end of the day I sat down to write up a post about the sessions I had listened to at the Australian Historical Association conference but I struggled to find a common theme in all of them on which I could develop a coherent post. But of course, I chose these sessions because they all said something about my current interests in war, masculinity and belief. I heard some … END_OF_DOCUMENT_TOKEN_TO_BE_REPLACED